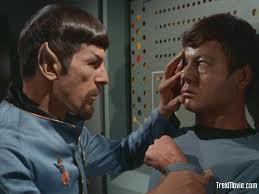 I’ve always wanted to do an article on how Star Trek is referenced in the law.  i09 started the process and listed some good ones in their article on 8 Ways That Judges Have Cited Star Trek From The Bench.

I recall a Supreme Court argument from two years ago, where the issue was whether violence against non-humans in video games was regulated by a California law.  Justice Kagan observed that violence to computer-generated Vulcans would not be covered by the act, merely because of the addition of two pointy ears.